﻿James Ballard is a composer, lyricist, and writer who has written works for choir, concert band, orchestra, chamber ensemble, various pop/rock/jazz ensembles, and musical theatre.  Although he received no formal training in composition before entering college at the age of 18, James developed a passion for music through his experiences in the Jefferson Forest High School band program and with numerous local musical ensembles, emerging as a strong musician and leader. Determined to teach himself composition, James pored over old music theory textbooks and any musical scores he could get his hands on. His first major debut as a composer came in the winter of 2004 with the rock opera Miracle At Midnight, for which he was a contributing composer and creative collaborator. In the spring of 2005, James made his debut as conductor with an original piece for the Jefferson Forest High School Advanced Symphonic Band, “Beneath The Celtic Moon”. ﻿

Sydney Angel Photography
As a student at James Madison University, James quickly developed a reputation among students and faculty members as an ambitious and talented composer, having many of his compositions and arrangements performed by student soloists and ensembles in his first few years. In the spring of 2009, James was commissioned by the JMU Furious Flower Poetry Festival to set text by the visiting guest artist, Pulitzer Prize-winning poet Natasha Trethewey, for a choral work to be performed as part of the festival. The piece was premiered at the John F. Kennedy Center for the Performing Arts by the James Madison University Chorale, and was praised by Trethewey as being a remarkable setting of the text. In the fall of 2009, James’ original musical Originals, for which he wrote book, music, and lyrics, was premiered at the Experimental Theater at James Madison University with a sold-out week long run. Also in the fall of 2009, James worked as a contributing composer for the JMU Rock Orchestra, featuring JMU School of Music students and local Harrisonburg rock band Skies Over Saturn. In the spring of 2010, James was once again commissioned by Furious Flower, this time to collaborate with NYC-based Emmy- and Grammy-winning composer Randy Klein on choral arrangements for his work, “Lineage: A Song Cycle”. James’ choral setting of “Christus Factus Est” was performed by the Madison Singers of James Madison University at the 2010 Piccolo Spoleto Festival in Charleston, South Carolina. In September of 2010, James once again teamed up with Furious Flower at JMU to present a new choral work, "Come Celebrate With Me", as the grand finale at a celebration of poet Lucille Clifton attended by distinguished poets from around the country, including Elizabeth Alexander, Kwame Alexander, Rita Dove, and Nikki Giovanni. In April of 2011, the JMU Chorale premiered all nine movements of Randy Klein's "Lineage: A Song Cycle", including the finale movement "For My People" which James arranged for chorus and rhythm section. April of 2011 also saw the premiere of James' heavy metal oratorio The Darkest Day, based on the seven last words of Christ.

In the spring of 2012, James moved to New York City to work as the Music Department Production Assistant for the Broadway production of George & Ira Gershwin's Nice Work If You Can Get It, starring Matthew Broderick and Kelli O'Hara and directed and choreographed by Tony Award-winner Kathleen Marshall. James was accepted as a composer into the Graduate Musical Theatre Writing Program at New York University in the fall of 2012, and spent two years writing numerous songs and short works with his classmates. His work at NYU culminated with the full-length Thesis musical The Oxford Epidemic, co-written with lyricist and librettist Seth Christenfeld. In the summer of 2015, The Oxford Epidemic was one of two musicals presented at NYU Tisch as part of the CDP (Collaborative Development, Production) Program, featuring a cast of actors from the New Studio on Broadway. In the summer of 2017, James and Seth were participants in Prospect Theater Company's "World Views" Musical Theater Lab, where nine writing teams were commissioned to write short musicals inspired by pieces of art on display in New York City. Since 2018, James has been the Artistic Director of the Curtain Up Songwriting Workshop at the University of Lynchburg in Lynchburg, Virginia, which pairs musical theatre writers from New York City with undergraduate students to create, develop, and perform original work. His work has been performed for cabarets and benefit concerts in numerous venues in New York City, including Joe's Pub, Feinstein's/54 Below, The Duplex, and the Laurie Beechman Theatre, in Los Angeles at Rockwell Table & Stage and Catalina Jazz Club, and internationally in the UK and South Africa. 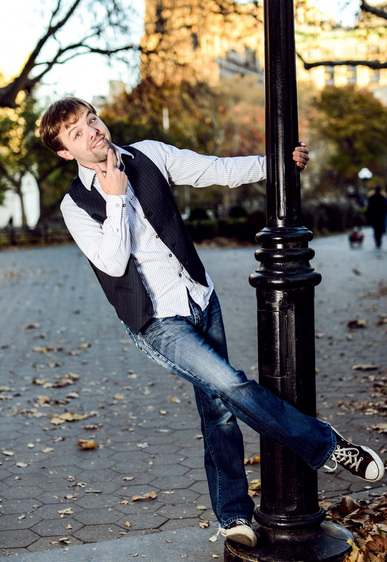 Sydney Angel Photography
In addition to his achievements as a composer, James is also an accomplished and multi-faceted performer. James has performed as both instrumentalist and singer across the east coast of the United States and Europe in concerts, festivals, tours, and competitions, including the All American Music Festival in Orlando, Florida, multiple performances at the John F. Kennedy Center for the Performing Arts, a European tour with the Virginia Ambassadors of Music, the London New Years Day Parade, and the Llangollen Eisteddfod in Wales. James can be heard playing the trumpet on "The Odd Sea", the debut album by Broadway actor and singer/songwriter Chris Sullivan. In October of 2018 James participated in recording sessions as a chamber choir member for the Anthem: Homunculus podcast, featuring music & lyrics by Bryan Weller and John Cameron Mitchell. James has also been very active in musical theater, performing major roles in shows such as Footloose, Once Upon A Mattress, Reefer Madness, City Of Angels, Stephen Sondheim’s Into The Woods, Edwin Penhorwood's operetta Too Many Sopranos, and Rodgers & Hart's Babes In Arms. He was a founding member and creative director of the Lynchburg-area theater company The Ivy Mountain Players.